It all began in grade 6 when I knew I had an affinity for food, I was sure that food was going to be a large part of the rest of my life. My love of cooking flourished with the culinary programs offered at my High School where I was able to specialize in baking for 3 years. Pastry arts came naturally to me as I began to hone my skills, and gain experience in the culinary world by working at YMCA camps over the summer months. My journey had begun.

Soon after graduation, I started my apprenticeship at Talisman Mountain Resort in Kimberley, ON and then moved to Krebs/Ali Baba Restaurant. Knowing that this was my career choice, I enrolled at George Brown and completed my Cook Level 1. I continued my apprenticeship at Charlies and at Janet Lynn’s where I was able to finish the required apprentice hours. My love and ability for creating stocks and sauces had grown tremendously by this point and I was the designated Saucier at each of these establishments. Upon leaving Janet Lynn’s I enrolled once again at George Brown and completed my Cook Level 2. It was not until I finally received my Red Seal in May of 1990 that I considered myself a Chef, a title that I hold proudly to this day. 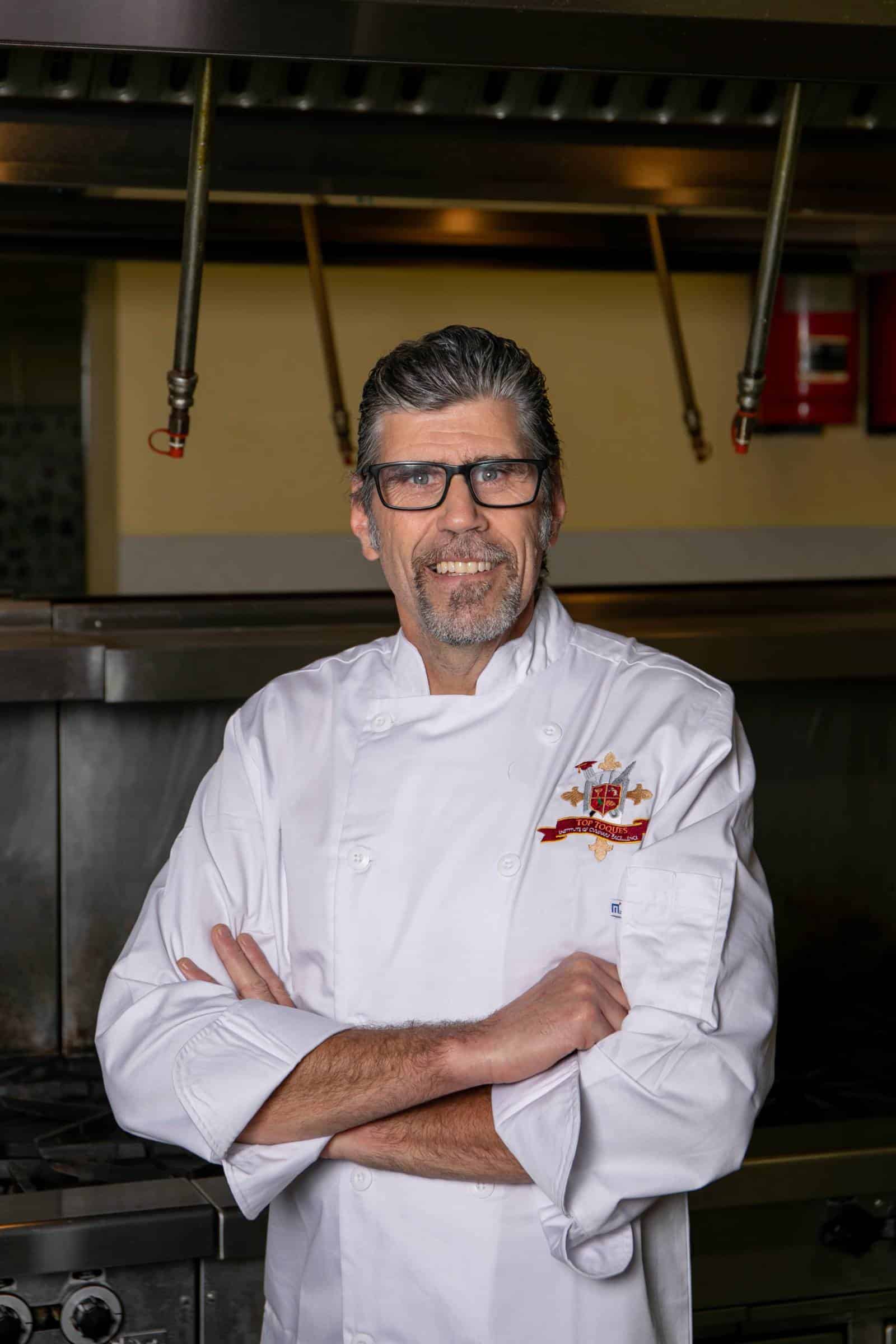 Over the span of the next two decades I worked in a number of establishments including my return to Krebs/Ali Baba as Sous Chef, Charlies as Head Chef, the Bismark Pub as Chef, and once again Krebs/Ali Baba this time as Executive Chef. I also worked for some time at Aberfoyle Mill as line cook/saucier, Pinestone Resort as Head chef, Del Dentes as Chef followed by Charcoals as Head Chef. I worked after this at Mohawk Racetrack for 2 years as Sous Chef and the Walper Hotel as the Executive Chef for 4 year. With all this experience under my belt I was ready for the next step, ownership. I owned the Rum Runner Pub in the Walper Hotel until a change of ownership forced me to move on.

Each of these experiences allowed me to grow as a Chef and also as a teacher because I was given on multiple occasions the opportunity to mentor numerous apprentices. I learned that I love teaching the art of cooking to anyone that wants to learn and the opportunity to do so with the next generation of Chef’s and Cooks became a part of my passion. This translated nicely into the next chapter of my life where I was given the chance to teach full time at Top Toques Institute of Culinary Excellences in Kitchener while a fellow Chef was on Medical leave, and, still now, as the Head Chef for the Culinary Boot Camps offered by the College.

Today, I am successfully running my own restaurant, Darlise Café in Kitchener, ON, it is a breakfast and lunch restaurant that creates every menu item from scratch using nothing but the best and freshest ingredients available. The Café also works with St. Matthew’s Church in Kitchener to provide a low-cost lunch for Seniors three days a week during the Fall/Winter/Spring seasons. Darlise Café provides allows me to wake up every day and follow my dream, but it also allows me to continue to provide mentorship to apprentices in my own kitchen. I still pride myself on the opportunity to nurture students into becoming the type of cook they want to be in the kitchen with a hands-on approach and a teaching style that give them all the tools they need to be successful on their journey.

DLI #O26042897963250 Ottawa Street South, Unit 109
Kitchener, Ontario, N2G 3S7
519-743-8335Contact
Site Map
|
Legal
We use cookies on our website to give you the most relevant experience by remembering your preferences and repeat visits. By clicking “Accept”, you consent to the use of all the cookies.
Cookie SettingsAccept
Manage Consent

This website uses cookies to improve your experience while you navigate through the website. Out of these, the cookies that are categorized as necessary are stored on your browser, as they are essential for the working of basic functionalities of the website. We also use third-party cookies that help us analyze and understand how you use this website. These cookies will be stored in your browser only with your consent. You also have the option to opt-out of these cookies. However, opting out of some of these cookies may affect your browsing experience.
Necessary Always Enabled
Necessary cookies are absolutely essential for the website to function properly. These cookies ensure basic functionalities and security features of the website, anonymously.
Functional
Functional cookies help to perform certain functionalities like sharing the content of the website on social media platforms, collect feedbacks, and other third-party features.
Performance
Performance cookies are used to understand and analyze the key performance indexes of the website which helps in delivering a better user experience for the visitors.
Analytics
Analytical cookies are used to understand how visitors interact with the website. These cookies help provide information on metrics the number of visitors, bounce rate, traffic source, etc.
Advertisement
Advertisement cookies are used to provide visitors with relevant ads and marketing campaigns. These cookies track visitors across websites and collect information to provide customized ads.
Others
Other uncategorized cookies are those that are being analyzed and have not been classified into a category as yet.
SAVE & ACCEPT
Contents © Top Toques Institute of Culinary Excellence
Created by Gecko Websites
Skip to content